The primary responsibility and obligation of state medical boards is to protect consumers of health care by ensuring that all physicians in a state not only are properly licensed but also comply with various laws and regulations pertaining to the practice of medicine. One of the important roles of state medical boards is the responsibility for disciplining physicians who engage in unprofessional, improper or incompetent medical practice.

State medical boards utilize a variety of tools as they go about the process of disciplining physicians. When issues arise — whether they are minor, such as failure to pay a fee, or more serious, such as inappropriate behavior with a patient — a variety of formal actions may be taken by a board, allowing physicians the flexibility to apply a level of disciplinary response that is appropriate for the issue being addressed.

The FSMB has collected and shared information about state medical board disciplinary actions since its founding in 1912, maintaining a comprehensive repository of national disciplinary data. This report includes national physician disciplinary statistics in a variety of categories for the year 2021.

How Disciplinary Information is Collected

State medical boards discipline physicians by issuing mandates known as “board orders”. When a board decides to take formal action against a physician, the board order stipulates which specific action will be taken. These actions represent a wide variety of forms of discipline, ranging from being assigned continuing medical education to having one’s license revoked (Table 5). 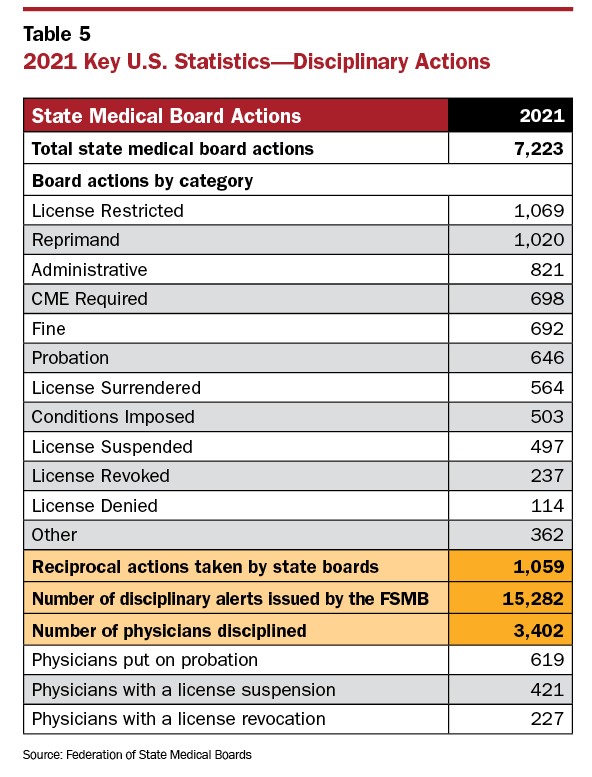 Disciplinary actions entered into the FSMB’s PDC are verified in writing and accompanied by supporting documentation, such as copies of board orders which include the findings of fact, conclusions of law, final decrees and stipulations. Each action is reviewed carefully and categorized based on the state board’s report before it is added to the database. At various times throughout the year, the FSMB conducts quality control audits to give state medical boards the opportunity to reconcile their data with the disciplinary information maintained by the FSMB. The PDC serves as a useful tool as state medical boards fulfill their role of providing disciplinary oversight of physicians.

Categories of board actions that can be taken against physicians include:

Administrative action: Non-punitive action that does not result in the modification or termination of a physician’s license. These actions are generally administrative and may be issued for reasons such as failure to pay a licensing fee.

Fine: In some cases, state boards may levy a monetary penalty against a physician.

Conditions imposed: Physician must fulfill certain conditions to avoid further sanction by the state board.

License denied: Physician’s application for a medical license or renewal of a current license is denied.

License revoked: Physician’s license is terminated; individual can no longer practice medicine within the state or territory.

License suspended: Physician may not practice medicine for a specified period of time, perhaps due to disciplinary investigation or until other state board requirements are fulfilled.

Probation: Physician’s license is monitored by a state board for a specified period of time.

Reprimand: Physician is issued a warning or letter of concern.

The FSMB provides services that draw upon its repository of data on disciplinary actions to bolster state board efforts to protect the public. One of the key services is the FSMB Disciplinary Alert Service, which was created to alert state boards when one of their physicians receives disciplinary action in another state. This service helps prevent disciplined doctors from practicing undetected across state lines.

Many physicians, including some who have been disciplined, hold licenses in more than one state. To prevent them from changing jurisdictions undetected, medical boards voluntarily share licensee data with the FSMB’s PDC. This information enables the FSMB to proactively notify boards within 24 hours when one of their licensees has been disciplined in another state. In 2021, state boards received 15,282 alerts from the DAS.

Reports from the DAS include data such as which board took a disciplinary action, the nature of the action (e.g., license revocation or suspension) and why the board took the action. Using this information, medical boards can launch their own investigations of the sanctioned physician or, in cases of particularly egregious behavior, take an emergency summary suspension against the physician’s license. Medical boards may also impose a “reciprocal action” — one based on the action taken by the originating board — to prevent or limit the physician from practicing in their state.

Medical boards have used the information provided by the DAS in many different ways, including:

State medical boards and organizations that credential or employ physicians are also able to query the FSMB’s PDC to obtain a practitioner profile containing license information and disciplinary actions taken against their physicians. Government agencies, such as the Veterans Administration and the Centers for Medicare and Medicaid’s Advanced Provider Screening solution and international regulatory authorities also access the PDC as well as credentials verification services, hospitals, insurance carriers, physician associations, medical groups, medical societies, managed care organizations and physician placement services. In 2021, more than 526,095 queries were made to the FSMB’s PDC, including 130,123 queries by state medical boards.

In an age of rapidly developing technology, state medical boards have improved recognition capabilities to know when and how to appropriately discipline physicians, a trend which may help account for changes in the number and types of actions state boards take against physicians licensed in their jurisdictions. The national regulatory information included in this report has been compiled using 2021 data from the FSMB’s PDC (Table 5). During the past ten years, on average about 4,000 physicians per year have received actions from state medical boards (Figure 8). 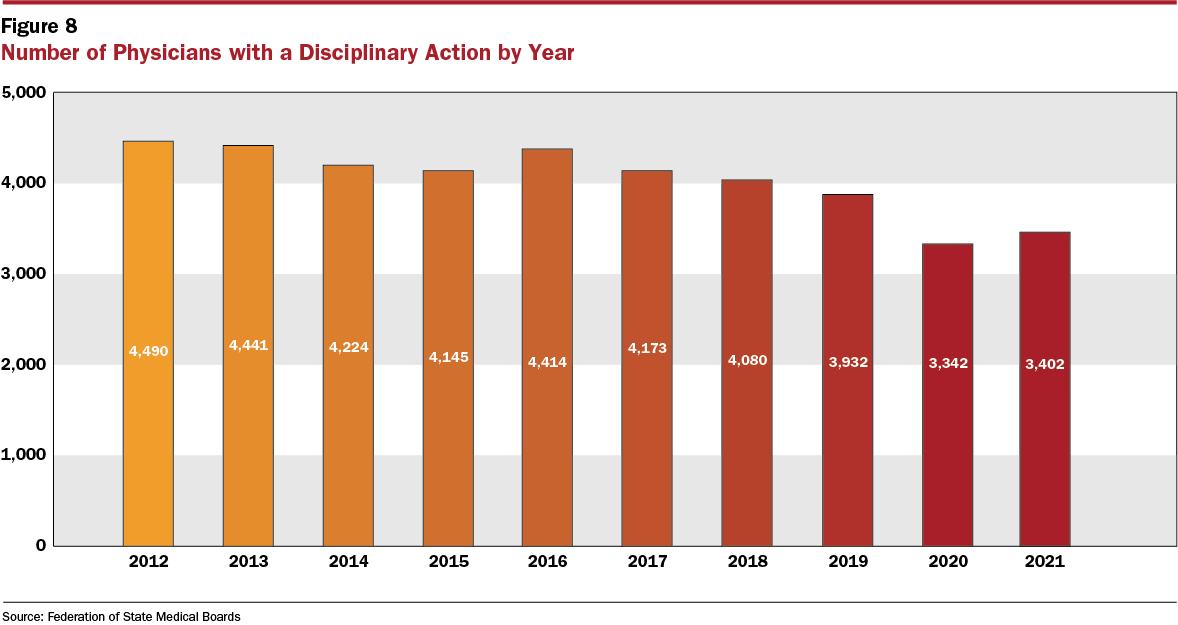 A comparison of data from 2012 and 2021 demonstrates that the number of disciplined physicians from all board action categories have decreased except for a small increase from the number of licenses surrendered and conditions imposed (Figure 9). 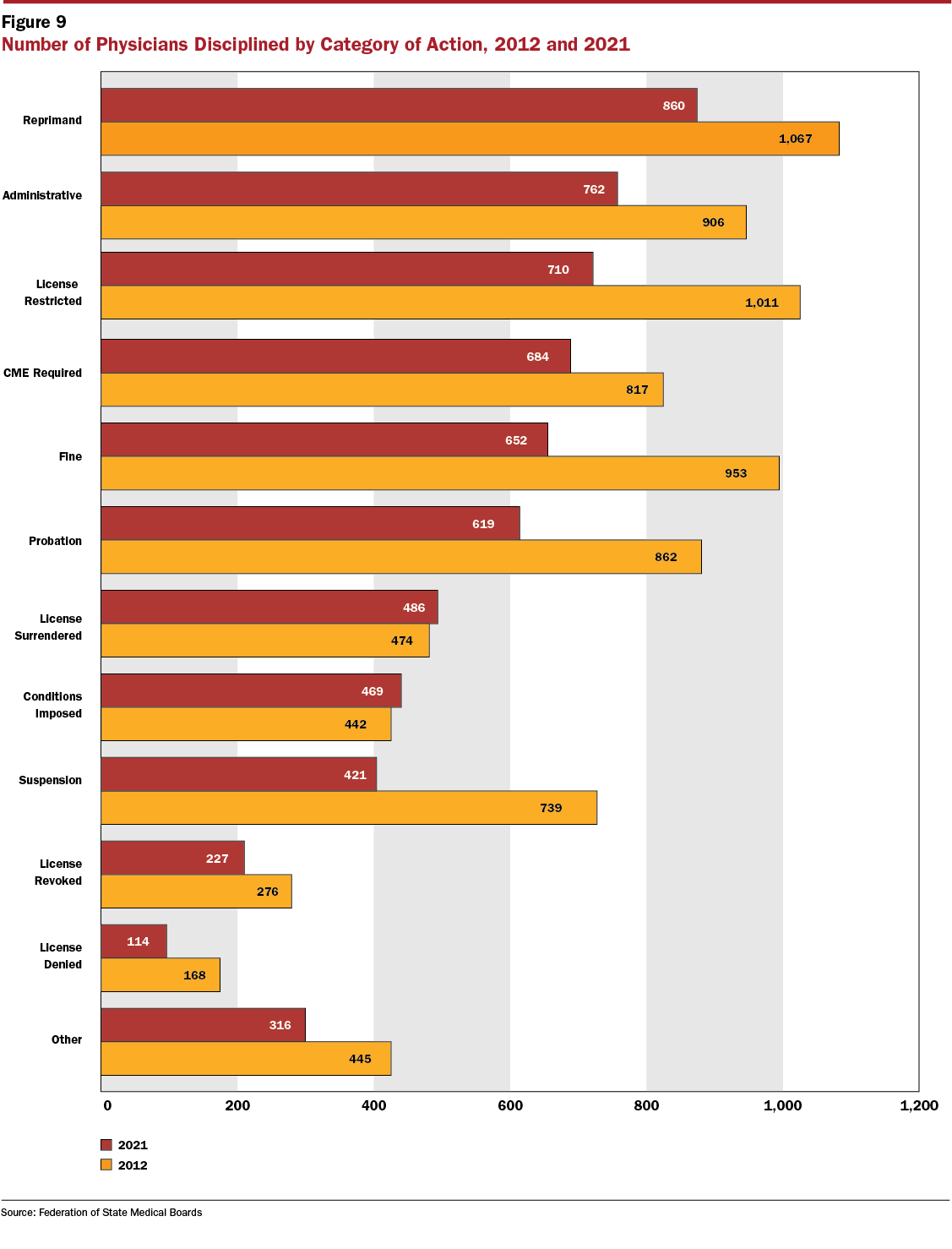 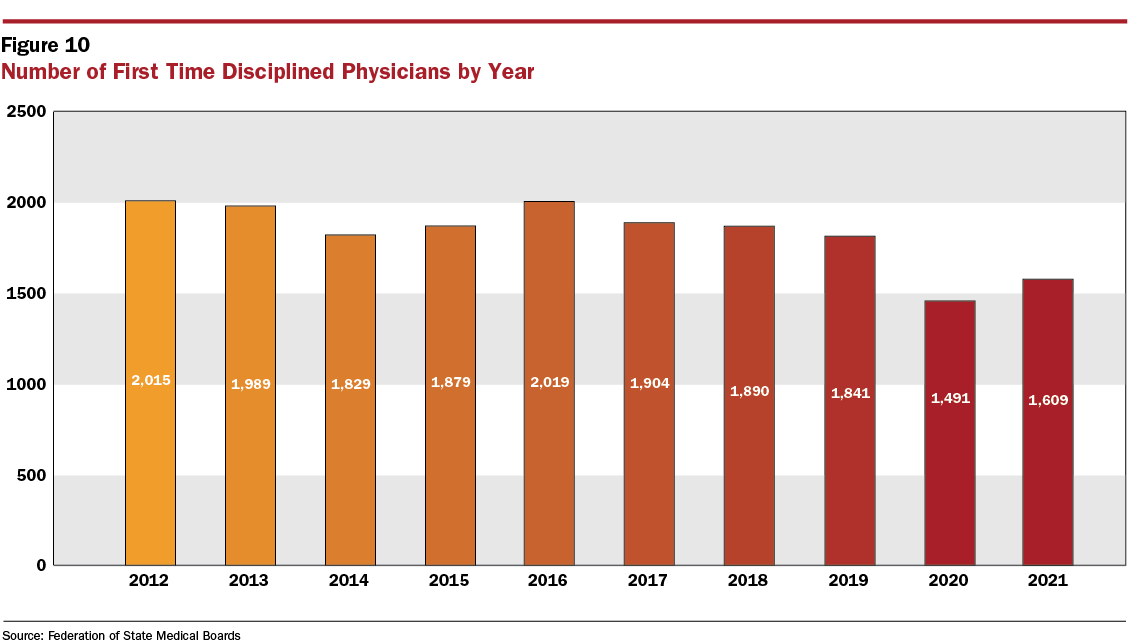 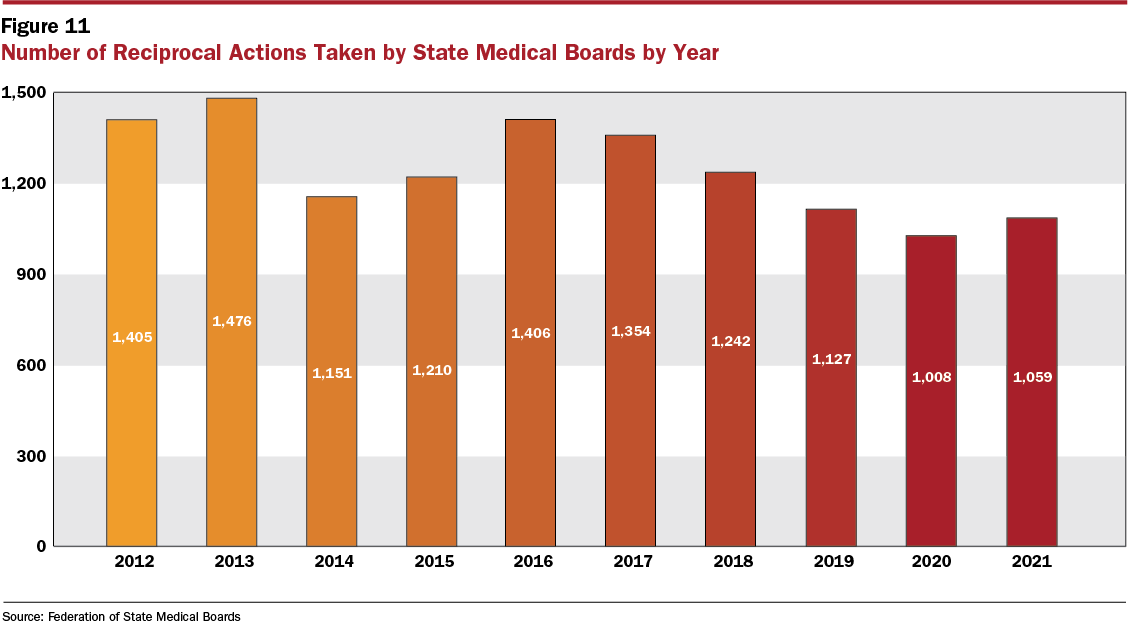 This report is not intended to provide detailed, comprehensive and comparative data about medical board disciplinary activities on a state-by-state basis. The tremendous variance in statutory, funding, judicial, administrative and geographic environments from state to state preclude meaningful comparative reporting of disciplinary statistics by state. Detailed information about the activities of specific states is available from individual state boards, which can be contacted using the FSMB’s state board directory, available at https://www.fsmb.org/contact-a-state-medical-board/.