Accurate and up-to-date information about a physician’s credentials and licensure status is crucial to state medical boards to enable them to effectively oversee and regulate the practice of medicine, especially since an active license is required to legally practice medicine and physicians sometimes have licenses in more than one state. Accurate and timely aggregated information about physicians’ licensure status and credentials is also of critical value to state and federal policymakers as they engage in health care workforce assessments, predictions and planning. Since 2010, the FSMB has been publishing information about physician licensure status in the form of a biennial national census of licensed physicians and six censuses have been published to-date.

About the FSMB’s Physician Licensure Data

License data is continuously provided throughout the year to the PDC by the nation's state medical and osteopathic boards. Four additional territorial medical boards (Guam, Northern Mariana Islands, Puerto Rico and U.S. Virgin Islands) are also member boards of the FSMB, but their physician licensure data was excluded from the current analysis. Because of their differing capacities and resources, state medical boards submit information to the PDC at varying intervals throughout the year. Most state boards provide medical licensure information to the PDC on a monthly basis, with some boards providing such data weekly or even daily.

When the PDC receives physician data, each record is matched to a master physician-identity table using a set of algorithms developed by the FSMB. This systematic process ensures accuracy and allows the PDC to centralize all data and track physicians across multiple jurisdictions.

Though physicians in the United States are not licensed based on their specialty or practice focus, and specialty board certification is not a requirement for medical licensure, the PDC receives and supplements physician record information with specialty and subspecialty certification data obtained from the American Board of Medical Specialties (ABMS) and the American Osteopathic Association (AOA). Deceased physicians are also identified and flagged in the PDC through information from state boards and an independent audit.

Provided in this report is a summary of the updated license statistics using FSMB’s 2021 data from each of the state medical boards in the United States and the District of Columbia. In aggregate, the information included in this report offers a snapshot of the number of all licensed physicians in the United States such as medical degree, medical school location, age, sex, specialty board certification and practice location by state.

The 2021 physician licensure data analysis reveals that there are 1,026,545 physicians with an active license to practice medicine, representing a net increase of 21% since 2010 (Figure 1). State medical boards issued a total of 112,994 first-time and licensure renewals during 2021, and 21,993 physicians received their first medical license from a state medical board. 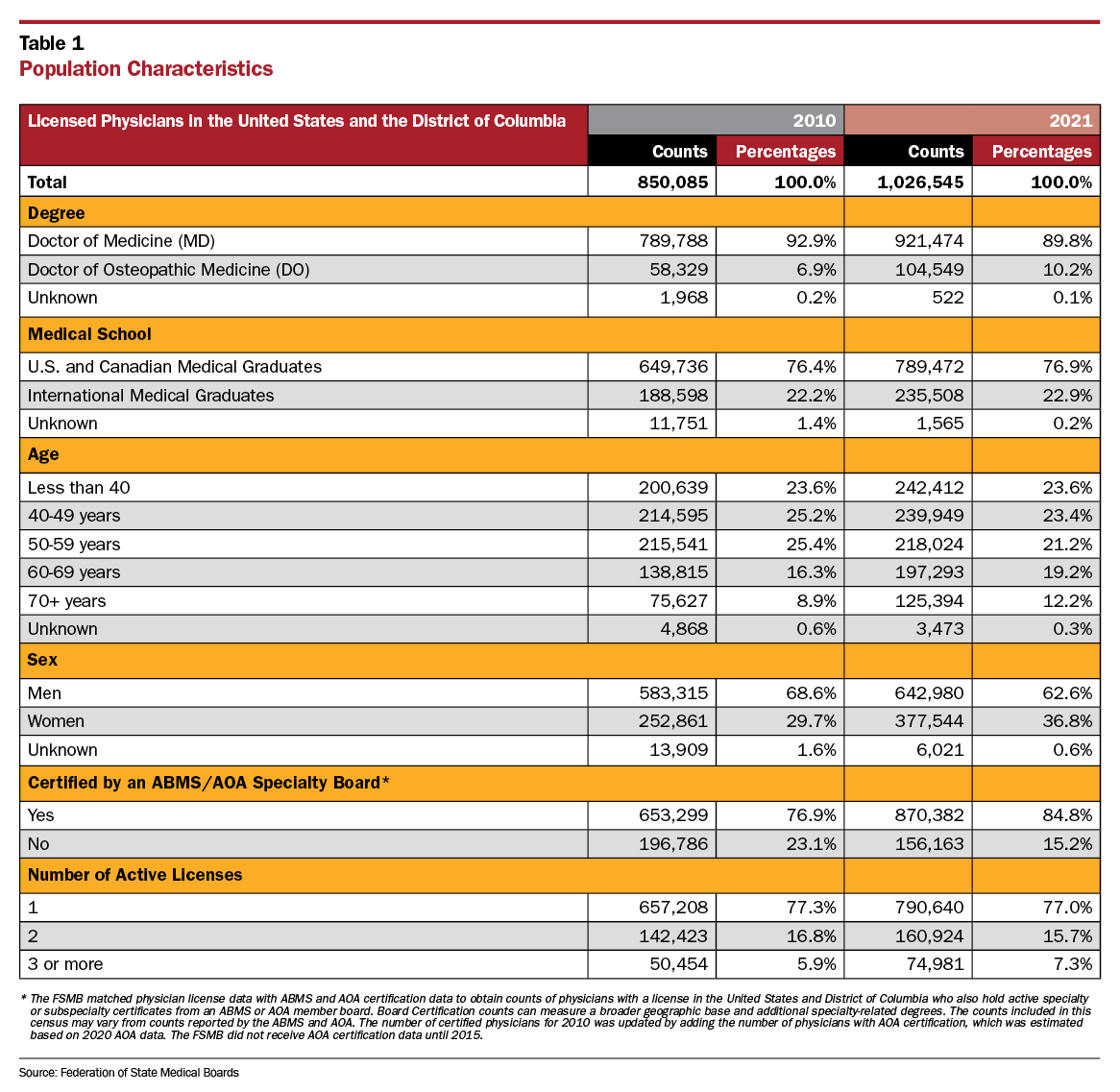 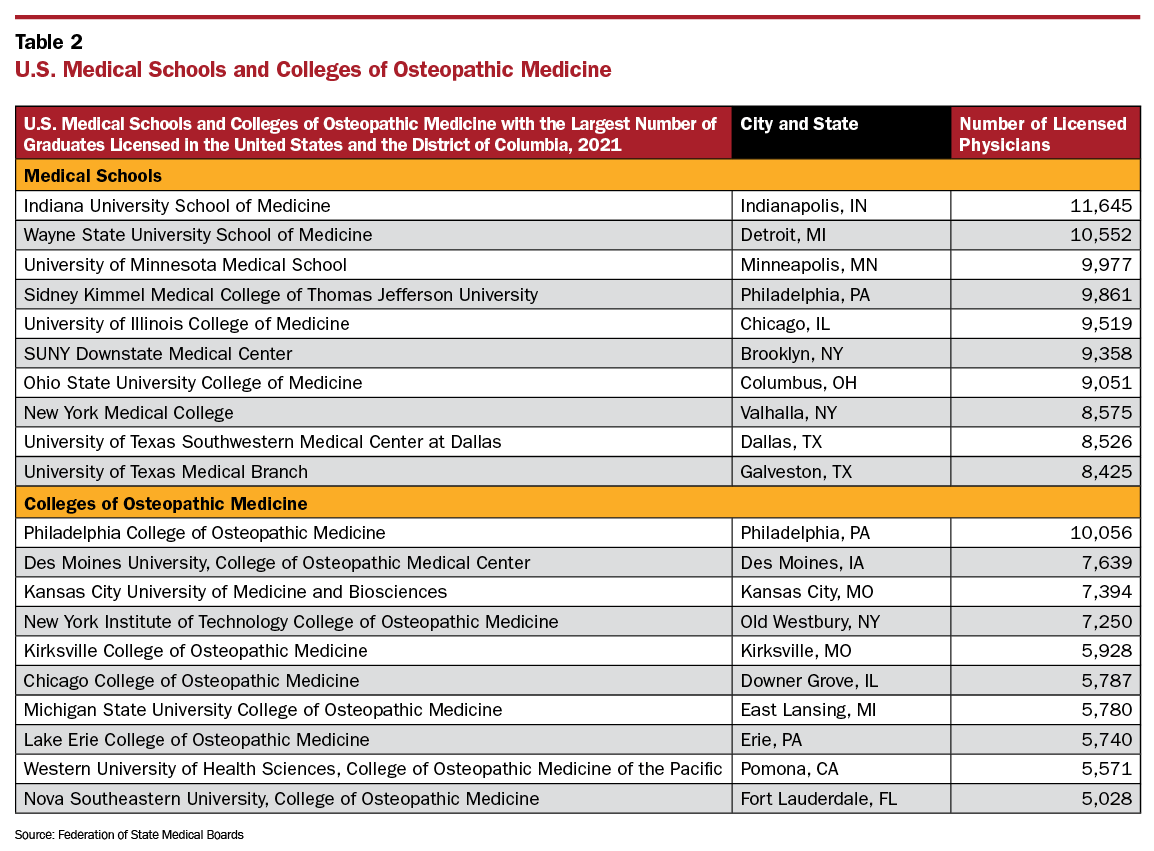 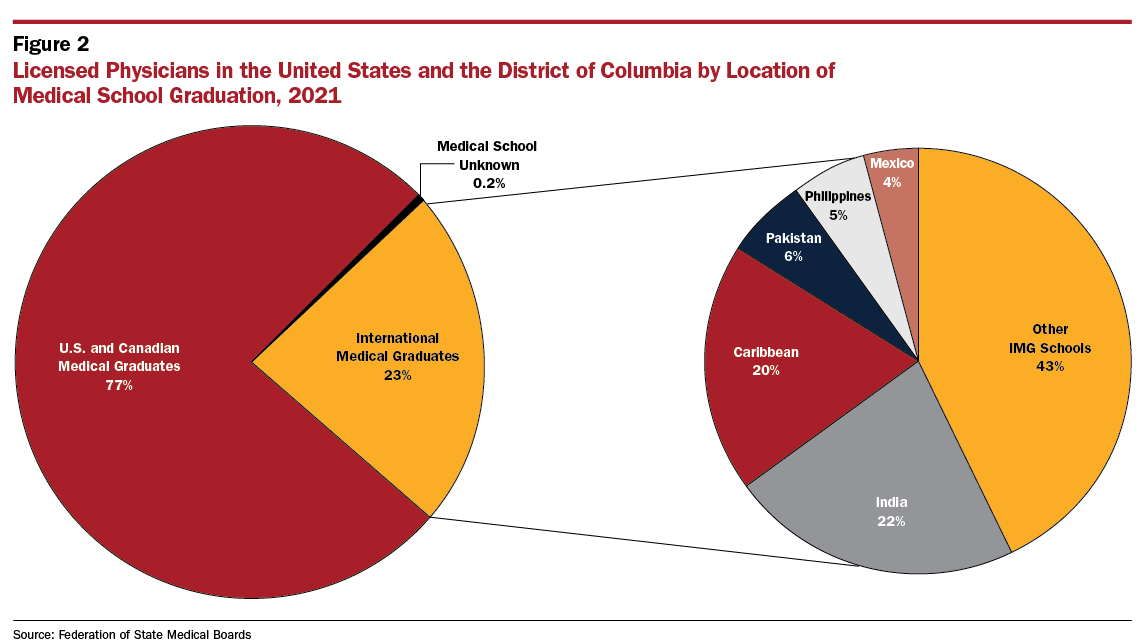 The data also highlight a continued and substantial increase in the number of licensed physicians who graduated from a medical school in the Caribbean (Figure 3).1 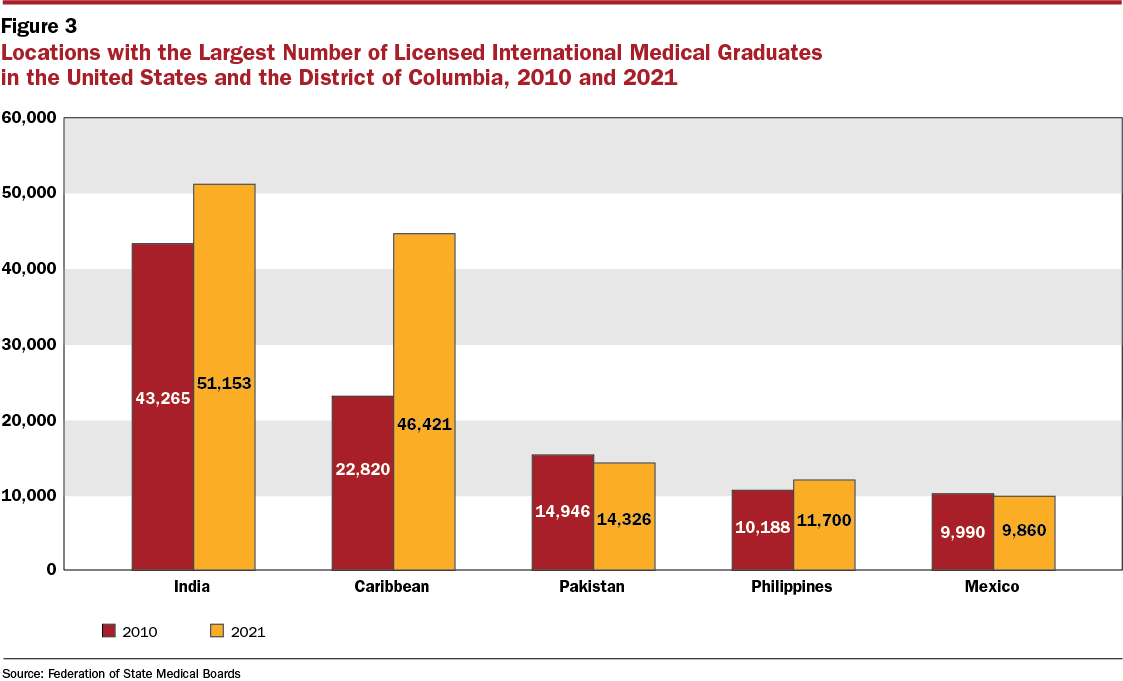 Caribbean medical school graduates represent 20% of licensed IMG physicians in 2021 compared to 13% in 2010. While the total number of IMGs with an active license in the United States has increased by 25% during the past eleven years, the number of physicians who graduated from the Caribbean has increased by 103% (Figure 3). There has also been an increase in licensed physicians from the Caribbean who are U.S. citizens, rising from 48% to 66% between 2010 and 2021, an increase of 176% (Figure 4). 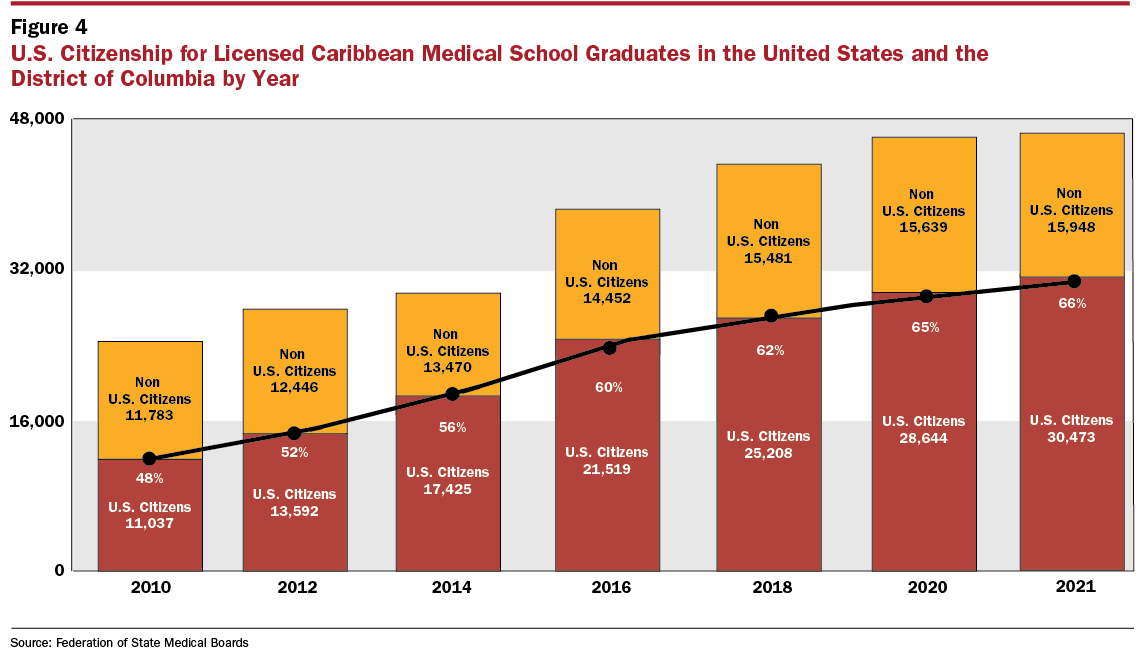 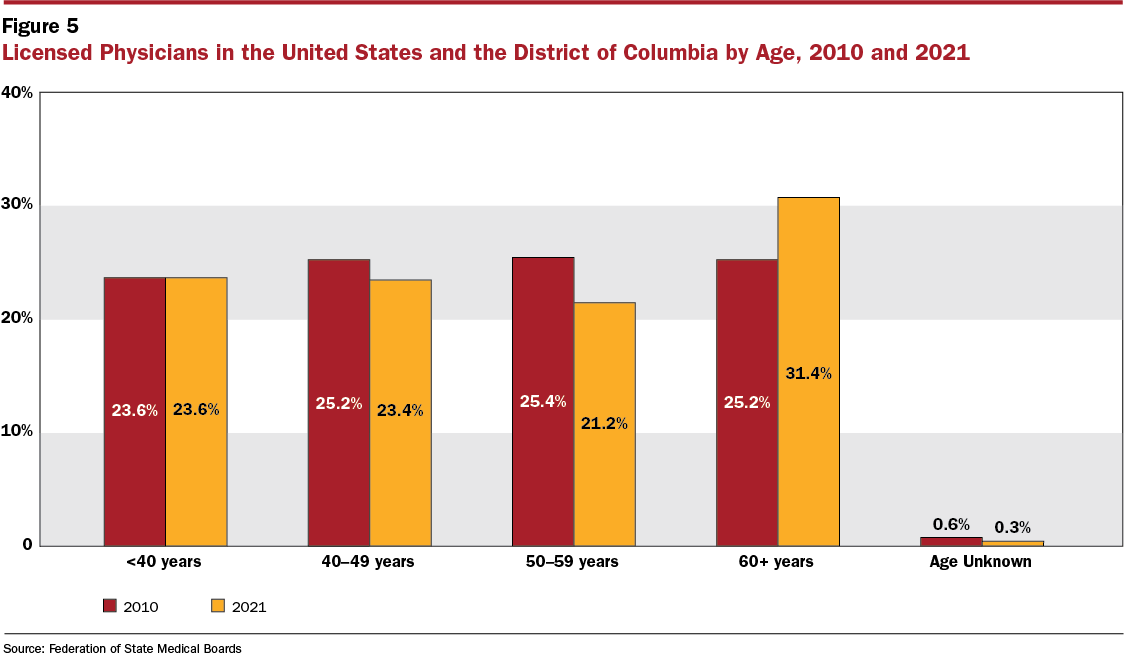 The large majority (85%) of licensed physicians in the United States and the District of Columbia are certified by an ABMS or AOA specialty board (Table 1). As demonstrated in Figure 7, specialty certification varies greatly by age group. The percentage of licensed physicians with ABMS or AOA certification dramatically increases from 27% for individuals who are less than 30 years old to 81% for those 30 to 39 years old, peaks at 94% for those 40 to 49 years old, and decreases to 72% for physicians 70 years and older. 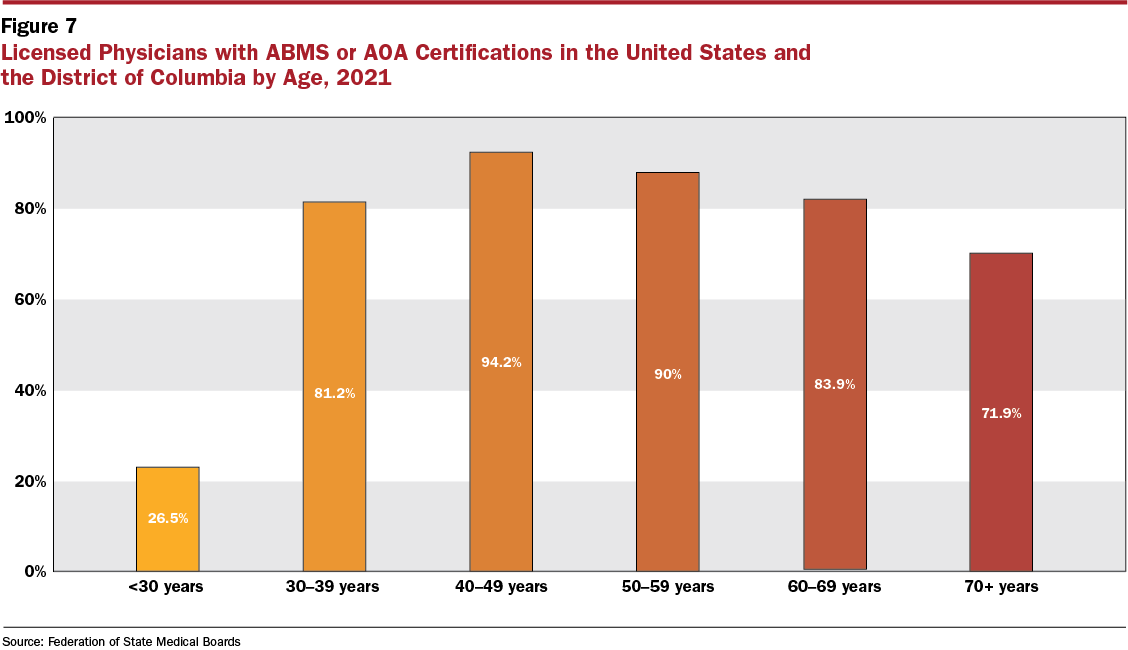